​Hurlbut’s Story of the Bible is a revered book in our family. As I recounted in Not Just at Bedtime, my husband read all 168 stories in this book to my younger children when they were 5 and 6, not once, but twice! My son Daniel remembers to this day that he begged his father repeatedly to read another story! ​

I have witnessed the profound effect that hearing these stories at such a tender age has had on my children. The author states in his Preface, “Those who in childhood learn the Story of the Bible are fortunate, for they will never forget it.” And that has certainly been true in our case. Daniel was recently elected to the Vestry of our church, having been asked by the rector to stand for election because ​of his outstanding familiarity with all parts of the Bible.

I had often wondered how Hurlbut came to writing The Story of the Bible, so I was delighted to ​come across a copy of the fourth edition published in 1952 at a recent library book sale that contained the following account from his son, Charles C. Hurlbut.

“One of the earliest recollections of my childhood is sitting with a group of other children, with my father in the center and a huge Bible on the table in front of us. The Bible was unusual, for it had a full-page woodcut on alternate pages. From the Creation to the Last Judgment, it was all there — the greatest picture book that any child could ask for.

My father, Jesse Lyman Hurlbut, was a wonderful story-teller; so nothing thrilled us more than to sit on his knees to hear him tell the stories as he turned the pages. Not only his own children, but all their friends flocked to these little gatherings, so that “hearing Bible stories” became a standard diversion in the neighborhood.

The old Bible was completely worn out before the story-telling period was ended, for it extended over two complete generations of children. In the process, by long practice, my father learned the language that holds a child’s attention and the way to make a story real to him. When he finally wrote the stories for children beyond the reach of his voice, he merely set down on paper the very words that he had been repeating for half a century to children grouped around his knees.”

Jesse Lyman Hurlbut (1843–1930​), an American clergyman of the Methodist Episcopal Church, held pastorates in multiple locations in New Jersey. ​In the Preface to Story of the Bible ​he speaks of himself as a Bible student, a Bible teacher and a helper through the press, of many who are instructing the young in the Bible. He says he long felt the need of a Book of Bible Stories, different in some respects from any work that had yet appeared. With this conviction he und​ertook its preparation. In its purpose and plan its distinguishing features are elaborated below, as he expressed them in the Preface.

All the principal stories in order

“The aim has been not merely to make a selection of the most striking and interesting among the stories contained in the Bible, but to tell all the principal stories in their connected order, and in such relation with each other as to form a continuous history. Whoever reads this book will find in it not only “Stories from the Bible,” but also the “Story of the Bible” in one narration. He will follow the current of Scripture history and biography.“

“This Bible Story, though continuous and connected, is arranged in the form of a series of Stories, each independent of all the others and treated separately. Every Story has its title; and an effort has been made to give to each a striking title, one that will arrest the young reader’s attention. A child or a parent who might hesitate in undertaking to read through the history in the Bible, may open almost at random and find a Story. Here are one hundred and sixty-eight Stories, each one complete in itself, while together combining to form one narrative. And with each Story is named the place where it may be found in the Bible.”​

“Special care has been given to the language of this book. I have endeavored to make it childlike without making it childish. Every word has been carefully chosen and there are few words in these Stories which a child of ten years old will not readily understand. Whenever it has been found necessary to introduce any word outside the realm of childhood, as “altar,” “offering,” “tabernacle,” “synagogue,” “centurion,” etc., it is carefully explained, not once only, but a number of times, until it becomes familiar. Doctrinal and technical terms have been everywhere excluded, and in place of them plain, familiar words have been given.“

Language of the Bible employed

“Inasmuch as the book is designed to lead the young reader to the Bible itself, and not away from it, the language of the Bible, or a language somewhat like that of the Bible, has been employed. For the same reason I have refrained from adding to the Bible record any imaginary scenes or incidents or conversations. I wish every child who hears this book read to feel instinctively that it is the Bible,  and not a fairy-tale, to which he is listening. When he grows older and reads these Stories himself for the first time in the Bible itself, I would not have him feel that he has been misled, or taught that which is not contained in the Word of God. The Bible stories are made plain, but they are not rewritten or changed.“

“In my opinion many books for children containing stories from the Bible are greatly marred by the evident attempt to interject a body of divinity into them, to make them teach doctrines which may be right or may be wrong, but are not stated nor hinted in the Scripture stories. Some excellent works have occupied much space here and there in trying to put into childlike language and to connect with Bible stories the deepest and most mysterious doctrines, which theologians find hard to understand. Others contain many moral reflections and applications which may be useful, but are not contained in the text of the story. I have sought to explain what needs explanation, but to avoid all doctrinal bias, and not to be wise above what is written. Only in a few instances where the New Testament warrants a spiritual interpretation of the Old Testament story has an application been given, and then in the simplest and fewest words. It is my confident hope that all denominations of Christians may feel at home in the pages of this book.“

​King James Version used for the most part

“In the management of the material, the paragraphs are short, and according to the modern manner the conversations are generally printed in separate paragraphs. The results of recent knowledge in Bible lands and Bible history are used as far as is suitable in a book for children. Where the Revised Version [American Standard Revision] is a manifest improvement upon the Old Version [King James Version], it has been followed, as bringing the reader a step nearer to the thought of the Biblical writers.”

​We strongly recommend that you include Hurlbut’s Story of the Bible at some point in your family’s read-aloud time. With the completeness of the narrative and the elevated language, it will serve your children well. We recommend it as a supplement to whatever children’s illustrated Bible story books you are using, rather than as a substitute, since the simpler illustrated editions are more inviting to children beginning to read on their own.

​​Have you used Hurlbut’s Story of the Bible with your family? What has been your experience? Please share in the comments! 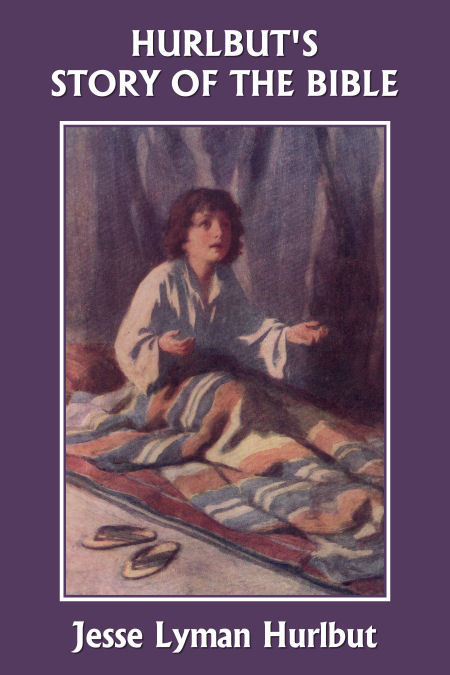 ​Get access to the ebook edition of ​Hurlbut’s Story of the Bible by purchasing the Yesterday’s Classics Ebook Treasury, Volume 1