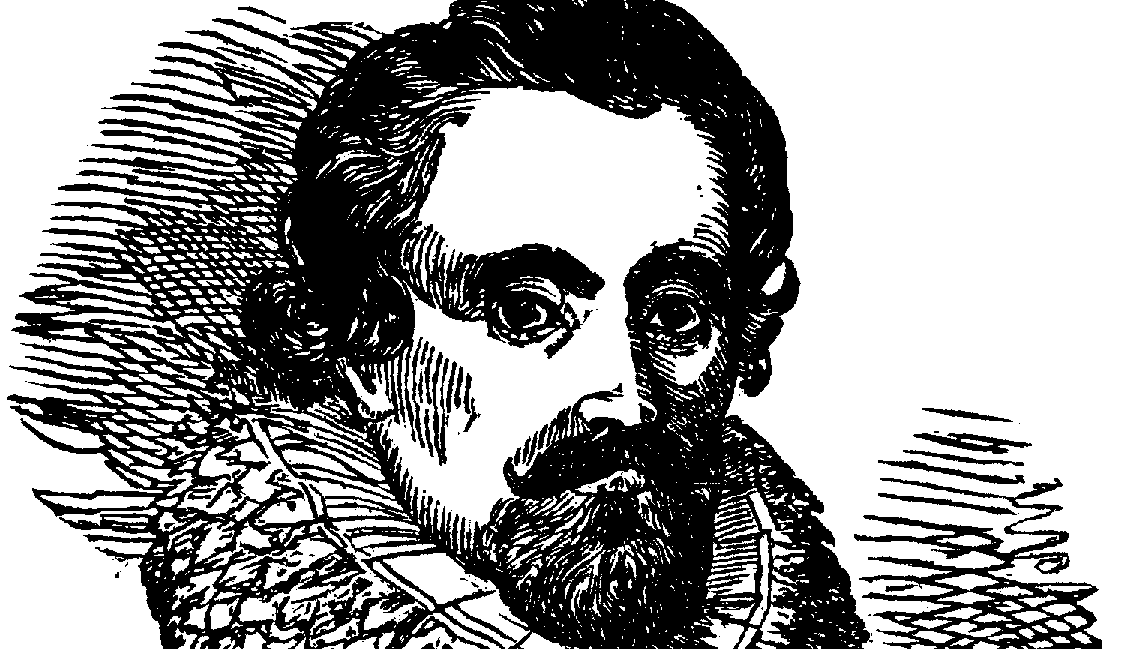 This post is the second of a two part series on introducing young readers to Shakespeare. You can read our first post here. In it we addressed which plays to begin with and the benefits of knowing the story before reading the play. We also covered the importance of seeing live performances, and the value of returning to the same plays again and again.

For many of us — especially middle and high school-aged readers — sometimes it’s best to take a multi-sensory approach. Hence, reading a Shakespeare play and listening to a recording of it at the same time can be incredibly helpful. This is a particularly beneficial practice for anyone struggling to understand the language, or grappling with its syntax.

This is a literacy technique that I first tried for myself when reading The Canterbury Tales in Middle English. There, I often found that I could identify words from their pronunciation but not their spelling. Other words were utterly incomprehensible from their pronunciation, but spelled almost identically to their modern counterparts. Between both reading and listening I was able to begin piecing sentences together.  Listening to a more experienced reader give proper inflection to the language was also a boon. A tremendous meaning can be conveyed just through pitch, intonation, emphasis, and other forms of vocal modulation!

This same technique can be just as useful in reading Shakespeare’s works as in Chaucer’s. With Shakespeare, however, complex syntax is typically problematic for readers, as opposed to the medieval spelling/pronunciation of Middle English.

Readers may not want to always read and listen to a play simultaneously. It may be something you only want to do for one act, or for the first play a student reads. But in any event, it can of great help to those just getting started.

The value of reading annotated editions

I cannot overemphasize how much I love annotated editions of Shakespeare plays. Some of them even have the text of the play on the right hand page, and detailed notes about the text on the other. The Folger Shakespeare Library publishes beautiful copies of the plays in this style. Other editions such as Signet Classics or Penguin simply include a few footnotes at the bottom of each page. The Folger copies (which you can often scout at thrift or used book stores) include definitions for individual words and also for longer phrases that are no longer in our common vernacular. Since an entire page is dedicated to notes, there is space both for more definitions and greater depth of explanation.

We’ve also enjoyed using Dover’s Shakespeare Lexicon set for more refined searches. It’s also been wonderful for learning more about language usage across all of the plays. This 2-volume set is a great investment if you’re serious about reading Shakespeare’s works over and over throughout your life. However, I would definitely recommend at least beginning with the annotated Folger plays.

Why you should also annotate your own books

Book-lovers often cringe at the thought of writing in their beloved books, and I totally understand this sentiment. However… I do find annotating to be an extremely helpful practice. It is particularly useful when it comes to Shakespeare plays or other similarly complex works. For one, annotation slows the reader down and encourages them to read more closely. For another, it helps readers create their own map of the text that they can return to again and again. When you annotate, you’re constantly asking yourself whether you understand each part of an argument or speech. You’re also noting the places where you do have questions, instead of just skipping blithely forward.

There are numerous ways to annotate a text. Readers may circle words they want to look up later and write comments or questions in the margins. Some like to underline key arguments or phrases, or highlight portions they want to return to later on. While annotations are ultimately a huge asset in preparing for a conversation or for a writing assignment, their more immediate and practical purpose is in turning a spotlight on portions of text that you’d like to be able to easily locate in the future.

A few more notes about annotating

Readers should be given a lot of latitude with the style and format of their annotations. We don’t all have the same intellectual approach to texts, and we certainly don’t need to have identical annotations. You might make suggestions as to what to include, but ultimately I would leave it up to the individual.

It’s also worth noting that annotating serves a completely different function than keeping a reading journal. Annotations should be compact and relatively terse, and making them shouldn’t significantly slow down the reading process.

Lastly, if you’re someone who dislikes writing in their books, you may want to find separate editions specifically for annotation. You can easily find second-hand copies of the plays or even print them yourself from websites like this. I personally have an older edition of The Complete Works of Shakespeare that I use for reference and wouldn’t dream of writing in. So whenever I want to study a play more carefully, I pick up an inexpensive and/or used copy for notes.

Incorporate Shakespeare into all of your lessons

Incorporating excerpts from Shakespeare’s works into all of your lessons can help to acquaint your students with Shakespeare in a non-assuming but effective way.

For example, when I taught English grammar and had to find examples of different grammatical concepts, I often looked to Shakespeare. I always did my best to find examples from a play we had already read together, but I also chose other famous lines that the students would probably have heard before, or would be likely to encounter later in their lives. I loved using Shakespeare for this purpose because his language use is often striking and because his sentences are rich with meaning. In addition to highlighting the grammatical concept in question, the lines also contained interesting and important ideas for students to consider.

While the Language Arts provide the readiest opportunity for studying Shakespeare, you can certainly incorporate short passages from Shakespeare’s historical plays into history lessons, as well, perhaps by finding monologues or scenes that describe characters. (For instance, Enobarbus’ speech about Cleopatra in II.ii of Antony and Cleopatra.) 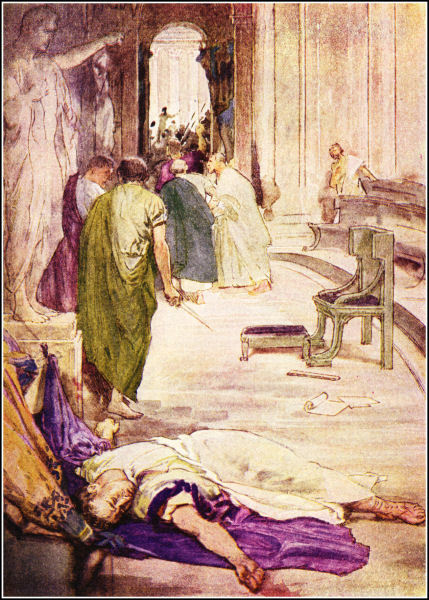 Furthermore, if you are reading Plutarch’s Lives (or any of the wonderful retellings such as Our Young Folks’ Plutarch or Plutarch’s Lives for Boys and Girls), you might want to consider including portions of the Roman plays in your study, as Shakespeare himself used a translation of Plutarch’s Lives as his primary source material for those works (Julius Caesar, Antony and Cleopatra, Coriolanus, and Titus Andronicus.) There are many particulars – both large and small – included in his plays that come directly from Plutarch, and it can be exciting for readers to see just how significant Plutarch’s influence was on Shakespeare. (Shakespeare also turned to Chaucer for several of his plays, so you could do the same thing in that case, either with the original text or with a retelling for younger children.)

If your children or students ever have the opportunity, I also encourage them to act in plays themselves. This can be a great experience even if they aren’t otherwise passionate about theatre. Reading Shakespeare aloud is much more fun than reading it silently, and acting it out is even better. Most community theatre and children’s theatre groups will put on abbreviated plays periodically, as do many schools.

If you live in a more rural area with fewer cultural resources, you can also put on your own productions of plays with resources like Shakespeare in a Box. Each Shakespeare in a Box kit contains scripts for each character, as well as a handful of props. Actors can use their own closets for the rest of the costumes!

I did two of these “productions” with a group of girl friends when I was in 8th and 9th grade, respectively. The plays we performed were King Lear and Macbeth. Each year we had a sleepover/rehearsal on a Friday night then put on the production the following afternoon for all of the parents and other siblings. It was by no means award-winning theatre, but we had a blast. We were also engaging with the text and spent our Friday night in deep discussion about Shakespeare!

A quick note on meter

Reading and/or teaching Shakespeare is daunting enough without discussion of meter. And as with Organic Chemistry or English Grammar, a lot of people would probably prefer to go their entire lives without ever encountering it. However, being familiar with meter actually makes reading Shakespeare much easier and more enjoyable. When read in pentameter, the text seems to open itself up and becomes far more accessible to most audiences. But, we found there was so much to say on this subject that we’ve decided to save this discussion for another day when we can dedicate an entire post to the topic.

Check back again soon to learn more about the importance of reading in meter!

Lastly, we are about to publish a new Yesterday’s Classics book on Shakespeare: Historical Tales from Shakespeare by Arthur Quiller-Couch. 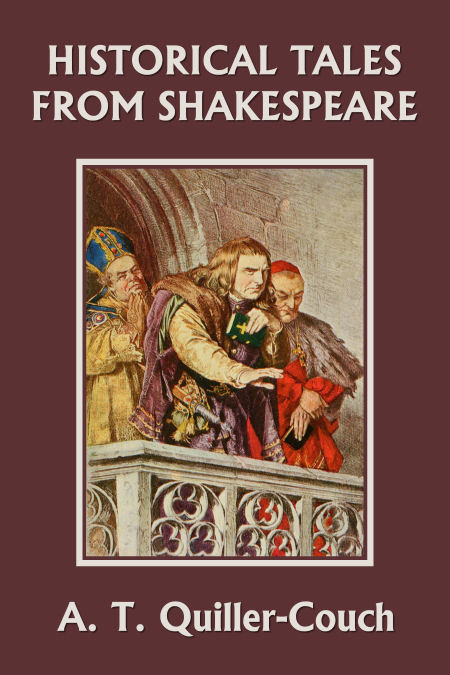 ​This book retells the stories of Coriolanus, Julius Caesar, John, Richard II, Henry IV, Henry V, Henry VI, and Richard III in chronological order. In this text, Quiller-Couch does a wonderful job of drawing connections between each of the stories, thereby creating a sense of continuity throughout the entire book.

We expect Historical Tales from Shakespeare to be available for purchase through www.yesterdaysclassics.com within in a week or two, and available at Amazon shortly after that!