​At about the age of eight most children are beginning to move out of the imaginative realm of fairy tales and into the world of heroic action. The heroic period, typically lasting from ages eight to twelve, is an ideal time to read stories that sow seeds that ​will bear fruit in years to come. Thrilled by manifestations of physical bravery, a child in the heroic age craves action, physical action, and is riveted by "literature every page of which is colored by feats of prowess."

There is no finer adventure tale in any literature than that of Robin Hood, none more satisfying to children in the early heroic period. This statement often brings a cry of remonstrance, and the objection is made that there is danger in portraying an outlaw as a hero, or in picturing the allurement of a brigandish career. But Robin Hood an outlaw? He lived in an age of injustice when might made right. The man of the people was but the chattel of a king, with no rights his lord was bound to respect.

Bold Robin, in the depths of Sherwood Forest, devoted his life to redressing wrongs. He took from the oppressor and gave to the oppressed. He strove to stamp out injustice and tyranny, and his spirit is the foundation of the democracy that underlies every just government today. He was an outlaw, not because he was a criminal, but because he rebelled against the monstrous injustice of his age and strove to ameliorate the condition of the poor and downtrodden. In the time of Henry the Second he was hunted like a deer, but in the twentieth century he would be honored as a great reformer.

Robin's sense of justice appeals to boys and girls, and his fearlessness and kindliness awaken their admiration. They respond sympathetically to the story from the opening chapter, when he enters the forest and Little John joins his band, through the closing one where the hero of the greenwood goes to his final rest. If the tale is told with emphasis upon the true spirit of Robin Hood instead of with a half apology, it will prove wholesome food for the children and will help to make them juster, kinder, and more democratic men and women.

​─ An excerpt from Educating by Story-​Telling
​​by Katherine Dunlap Cather

​Start with a ballad of Robin Hood

​There are dozens of ballads about Robin Hood. Here are the opening lines of one, as printed in Eva March Tappan's The World's Story: England, to pique your children's interest. Incidentally, stanzas of this very ballad are included in the second chapter of Stories of Robin Hood Told to the Children, recommended below.

When Robin Hood was about twenty years old,
With a hey down down and a down,
He happend to meet Little John,
​A jolly brisk blade, right fit for the trade,
For he was a lusty young man.

Tho he was calld Little, his limbs they were large,
And his stature was seven foot high;
Wherever he came, they quak'd at his name,
For soon he would make them to fly.

How they came acquainted, I'll tell you in brief,
If you will but listen a while;
For this very jest, amongst all the rest,
I think it may cause you to smile.

Bold Robin Hood said to his jolly bowmen,
Pray tarry you here in this grove;
And see that you all observe well my call,
While thorough the forest I rove.

We have had no spat for these fourteen long days,
Therefore now abroad will I go;
Now should I be beat, and cannot retreat,
My horn I will presently blow.

Stories of Robin Hood Told to the Children, as one of the ​titles in the Told to the Children series published by T.C. & E.C. Jack of Edinburgh in the early 1900s, works equally well as a read aloud for younger children and as independent reading ​for students at a fourth grade reading level. In her typical engaging prose, H. E. Marshall sets the Robin Hood stories in their historical context and relates key incidents in the chronicle of Robin Hood and his band of merry men.

In The Merry Adventures of Robin Hood Howard Pyle combines his considerable skills as illustrator and writer to produce a narrative that at the same time captivates and delights. He employs an "old English" idiom using archaic words such as "An" (for "If") and "Sith" (for "Since") in a style reminiscent of the ballads. While this make it a more challenging read (it is one of the "stiffer" books assigned in Year 2 of the Ambleside Online curriculum), it builds capacity for comprehending increasingly complex language, such as students will encounter in Shakespeare and others. ​Most families will want to read this book aloud, as it is suitable for independent reading only by children reading at a high level.

​Reading any of the books about Robin Hood may inspire dramatic play centering around the figures inhabiting Sherwood Forest long ago. Watch for home-made swords or bows and arrows to appear, along with feathered caps and cloaks of forest green!

Or your child may become so fascinated by Robin Hood that he begins a collection of retellings of Robin Hood, and makes well-illustrated editions​ a priority.

​Do you have a favorite retelling of Robin Hood to share? Or a story about how your child was influenced by hearing of Robin Hood and his band of merry men? Please tell us about it in the comments below! 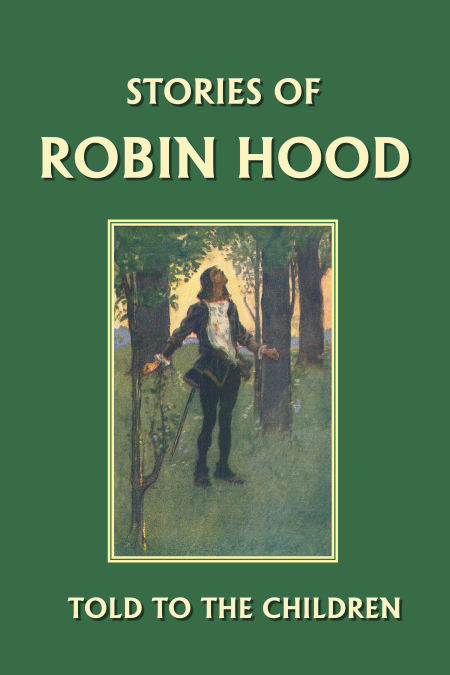 ​Stories of Robin Hood Told to the Children
by H. E. Marshall

​The Merry Adventures of Robin Hood
by Howard Pyle