If you’ve ever read any of J.D. Salinger’s books or stories about the Glass family, you’ll no doubt find many similarities between those characters and the four Melendy children. (One notable distinction, however, is that the Glass children are all older than the Melendys, and are more fully developed and intellectually independent characters as a result.) The Melendy offspring range in age from 6 to 13 and appropriately, these books are ideal for readers 8 through 12. And for anyone looking for their next book to enjoy as a family, this series makes for an especially lively read aloud experience!

About the Melendy Family

The Melendy gang is full of character and charm. The family is composed of four children – Rush, Mona, Randy (short for Miranda), Oliver, and father. Joining them are Cuffy, the Melendy’s housekeeper and surrogate mother, and Willy, the family’s handyman. Mr. Melendy is a professor, who travels regularly to give lectures, and later becomes employed by the government to do confidential work during WWII. Sadly, the children’s mother is deceased and not often referred to.

Mona, age 13, aspires to be an actress, and is known by her family for reciting relevant passages from Shakespeare whenever an opportunity arises. Rush, age 12, is a pianist and zealous composer, and although not formally sanctioned, serves as leader to his three siblings. 10-year old Randy is perhaps the character into whom the reader is offered the most insight, as she is modeled upon author Elizabeth Enright herself. Randy is a dancer, and also loves to paint; of all the children she is perhaps the most imaginative and romantic. Lastly, Oliver, the youngest, is a mere 6 years old, but has a mind and interests of his own. Oliver is fascinated with nature in all its forms, and delights in erasing the distinction between the outside world and the inside of his bedroom (much to Cuffy’s horror and chagrin).

Although born in the Midwest, Elizabeth Enright spent her formative years living in New York City. Like Randy, Elizabeth Enright was once an aspiring dancer and is even said to have studied under Martha Graham for a period of time, though dancing never became her career. She received further education from studying at Parsons School of Design and The Art Students League of New York. Both of Elizabeth’s parents were professional illustrators, and she soon followed suit, working both as a children’s book illustrator and author early on. Her focus quickly shifted toward writing, however.

Among the books Enright is most famous for are Gone Away Lake and Thimble Summer. She received the Newbery Medal in 1939 for Thimble Summer, and the distinction of being named author of a Newbery Honor book for Gone Away Lake in 1958. Enright even reviewed children’s books for the New York Times throughout her career! In addition to penning books for younger readers, she is also a noted author of short stories for adults, with numerous stories published in magazines such as The New Yorker, Harper’s Magazine, and the Saturday Evening Post, as well as stories included in six different O. Henry award collections.

While living in New York City, the premise for “The Saturdays” is born one unusually dull weekend. The children collectively decide to each turn all of their allowance over to one sibling each week, so that instead of having 50 cents (or 10 cents, in Oliver’s case) for the week, each has a whopping $1.60 to spend once a month on a grand adventure. Rush, for example, as an avid pianist and composer, uses his money to go to the opera. Randy spends the afternoon at an art museum, and forms a lifelong friendship with the wonderful Mrs. Oliphant. Even Oliver participates, although on his Saturday, he surreptitiously escapes to the circus by himself and nearly frightens the whole family out of their wits.

This first book serves as a delightful reminder of the magic that Saturdays can bring, especially to schoolchildren. The emphasis here is on engagement with the arts, as well as independent adventure. This book is also interesting in that the Melendy children must each choose their special Saturday activity for themselves, with the understanding that their adventure will be both extraordinary and enriching. In addition to choosing the activity, each is required to undertake the responsibility of figuring out all of the logistics of organizing their adventure like purchasing a ticket or finding transportation. (6-year-old Oliver is the exception here – he was supposed to take Cuffy, but opted instead to go rogue.) Of the three, Mona is the only one who doesn’t spend her money in a satisfactory manner, but that experience was educational for the whole family and no doubt beneficial for Mona.

In the second book of the series, the Melendy family moves to an unusual home in the countryside near New York, so called “The Four-Story Mistake” because its builders astonishingly forgot to include a fourth floor! The house is an unusual piece of architecture, and although the children are at first sad to leave the city, they soon become enchanted with their new home. The Four-Story Mistake itself has plenty of character, as well as plenty of nooks and crannies for the children to explore. The surrounding land is similarly full of hidden treasures, complete with forests, flowered meadows, rivers, caves, etc., affording the children ample opportunity to play out of doors. In this book, Oliver discovers a secret basement room full of musty marvels, Randy discovers a precious prize of her own, and all of the children together uncover an astonishing mystery about their home, as well as its former occupants. Somehow the Melendys even find themselves the new owners of a pet alligator!

“Then There Were Five”

By this time, the second World War has broken out, and the children are going around from house to house to harvest whatever scrap metal their neighbors might be willing to donate. This exercise introduces the four Melendys to a wide variety of neighbors – some delightful, like the charming old bachelor Mr. Titus whose twin loves are fishing and baking. (Naturally, these interests greatly endear Mr. Titus to Oliver, who soon becomes Mr. Titus’ loyal disciple, and single greatest source of assistance in disposing of the countless cakes that Mr. Titus bakes each week.) The children are also introduced to much more ominous neighbors like the dreadful Oren Meeker, whose young relative Mark bears the brunt of his ire.

By this point, both Mona and Rush, the two eldest children, are working part-time outside of the home, in addition to going to school. Mona plays a recurring character on a radio drama, and Rush gives piano lessons to district schoolchildren. But, the best thing that the children bring home in this book is not the money they gladly contribute to the family coffer, nor the scrap metal for the war, but a wonderful new addition to the family.

The last book, “Spiderweb for Two: A Melendy Maze,” takes place when Rush, Mona, and their adopted brother have all gone away to school. Randy and Oliver are more or less left alone with Cuffy and Willy, as father has been traveling for work more and more frequently. The older children’s absence is sorely felt, and both Oliver and Randy begin to slip into a state of ennui.

But something strange soon begins to happen. An unknown person writing in an unknown hand leaves riddles for Randy and Oliver, leading them on an epic treasure hunt that takes place throughout the remainder of the school year. Each clue leads them to another riddle, and the children work frantically to crack each one as quickly as they can, without giving Cuffy or Willy cause for suspicion. At the end of their journey, Randy and Oliver are greeted with a surprise that neither expected, but that both are overjoyed by.

In all, this is a light-hearted and whimsical series that young readers have adored for decades. The books are incredibly well penned, with exquisite descriptions of the children’s sensory experiences and stories that are chock-full of adventure and excitement. Even though the Melendy children have lost their mother and several of the books take place with World War II as a backdrop, Enright maintains a sense of levity throughout the series. Although the children volunteer in war relief efforts, Enright’s tone never becomes somber in the way that many other children’s books from that time do. However, because these books are so whimsical and idyllic, the series can be a good one to interleave with more somber or emotionally weighty reads like the Mildred Taylor books.

Did you ever read The Saturdays or any of Elizabeth Enright’s other books as a child? What about to your children? If so, what do you remember? Did the Melendy family ever inspire you to go on an independent weekend adventure of your own? 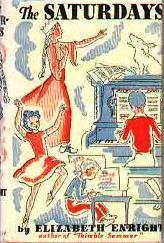 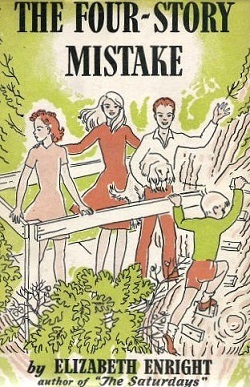 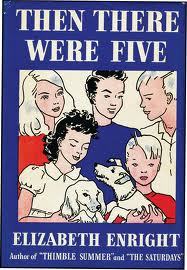 Then There Were Fiveby Elizabeth Enright 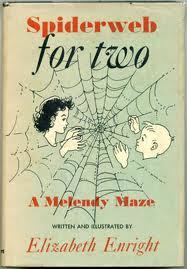